Gary Albertson – Fine Art Landscape Photographer
In 2010, Gary Albertson's 30-plus year career as an award winning corporate graphic designer and acclaimed, internationally collected, fine art landscape photographer seemed at its end, the result of a rare inherited eye disease. Today, with just a fraction of peripheral eyesight remaining, his deep love of nature drives him to adapt against all odds as he continues to refine his photographic art.
“One of the gifts of blindness, especially to a photographer, is the requirement of moving much slower. Composing an image takes me much more time now. I stitch all of the pieces together in my head to finally 'see' shape and form. Oh, what a wonderful sacrifice to slow down. Just give me a hundred yards and two weeks.”
“I started my career in corporate graphic design in 1970. My love of photography began, looking over the shoulders of many large format commercial photographers. In 1980, I designed, produced and self published the award winning book, 'Fire Mountain: The Eruptions of Mt. St. Helens,' royalties from which, allowed me to leave graphic design and turn to a full-time career as a fine art landscape photographer.”
“In 1995, while doing photography on the South Sea island of Roratonga, my kidneys suddenly failed. I barely made it back to the states to undergo dialysis. A year later, I received my sister’s kidney, which gave my life a new purpose; to follow my deep love of nature through the lens. In that same year, I was diagnosed with Pigment Dispersion Glaucoma.”
“In 1999, I moved to the shores of the Metolius River in central Oregon, committing myself to capturing the magical beauty of its waters and surrounding valley.”
From the beginning, Gary’s main camera has been a TOYO 45AX and also randomly switching to a Pentax 67. Advancements in digital photography have compelled Gary to follow, finding its benefits and now his main camera, for 80% of his work, is a Nikon D750. Since 2010, as Gary has lost eyesight, he works with professionals on post-production. He is always hopeful, looking to the future for new ways to enhance his independent spirit.
“For years I have found joy in sharing my photographs and have been giving talks and speeches about adapting, BEING captured before capturing, the art of seeing, not just looking. It has been a Journey Into Blindness. My main purpose is to simply adapt to my limited sight and use it to refine my photographic art. I hope this unique perspective opens a new door or window to the everlasting power of Nature."

Posted by Unknown at 2:23 PM No comments:

Gary Albertson, local professional fine art photographer, will be the featured speaker at the Diane Jacobsen Speakers Series at the Sisters Library on Sunday, February 8, at 1:30 p.m.


A resident of Camp Sherman since 1999, Albertson has shot artistic photographs of local landscapes throughout Central Oregon, and especially in the Metolius Basin. For years, his Sisters Gallery & Frame Shop on Hood Avenue has featured many of his beautiful large-scale photographs, which are available for purchase.

At the library presentation Albertson will take the audience inside his journey into blindness and explain how he is able to continue to capture extraordinary images despite his increasing loss of eyesight. The center of his vision in both eyes is gone. In one eye he has fuzzy peripheral vision around the outside of his vision field and in the other he only has vision around the inside edge.

The loss of vision is the result of pigment dispersion glaucoma, which was diagnosed in 1996 when he was being prepped to undergo liver transplant surgery. Because of fear, he did not have the recommended surgery and his sight loss has been slow and gradual since then. He wants to encourage people not to fear glaucoma surgery as he did.

Albertson describes his vision as being able to see the way Monet painted - everything vague. He contends that going blind later in life is better than as a young person because he is able to draw on a lifetime memory bank of things, colors, people and places.

His intimate familiarity with his beloved Metolius River allows him the freedom to wander along the river, alone with no assistance, carrying his tripod over his shoulder and his camera gear in his backpack. A lifetime of handling camera equipment and creating photographs sustains his ability to continue to pursue his passion for capturing images of nature with clarity, sensuality and attention to detail.

Albertson will share the challenges and opportunities presented by his blindness. He has created new tools and made many accommodations to enable his continued pursuit of photography. Brightly colored reflectors on lens caps help him to find them if they get dropped. He has learned to put things back in the same place every time so he can more easily retrieve them later.

Transportation around Camp Sherman is provided by his specially equipped four-wheeled recumbent bike that is painted a bright yellow allowing Albertson to see his bike and for him to be seen by others.

The fact that a barely sighted man can shoot exquisite photographs is amazing in itself. But the most notable quality of Albertson's is his upbeat take on life and his gracious appreciation for the gifts he says his blindness has provided.

"I used to be an aloof Norwegian, standing on the perimeter of things. With my blindness I've learned to be thankful, to accept the gifts of people who have come out of the woodwork to be of assistance. And now I am so appreciative because I have learned what friendship is. People in this area are so helpful... so you could say that I'm living in heaven - living where I should be."

Albertson went on to say, "Lose your eyesight and you'll break down your old 'rules.' You're going to have to say thank you a lot. I've gone from being very independent to very dependent and it's OK."

He approaches his blindness as if it were a game. For example, if someone fills a plate with food for him, he doesn't know what he's getting. There can be no preconceived notion regarding the flavors or textures so he gets to be surprised when he puts the food in his mouth. Having the courage to allow himself to be surprised is an awakening process. He said he has taken on being blind as an adventure, not a
disability.

Standing beside the Metolius River as Albertson explained how he captures his images, his passion and enthusiasm for his world were contagious, and this reporter was left impressed by his great appreciation for all that life offers - challenges, opportunities and rewards.

Albertson will show slides of his work as he describes how he continues his photography as he journeys into darkness. He will discuss why he has dedicated his life to photography, provide information on the equipment he uses, and then share who he is through his photographs, his children as he calls them. The presentation is open to the public and is free of charge. 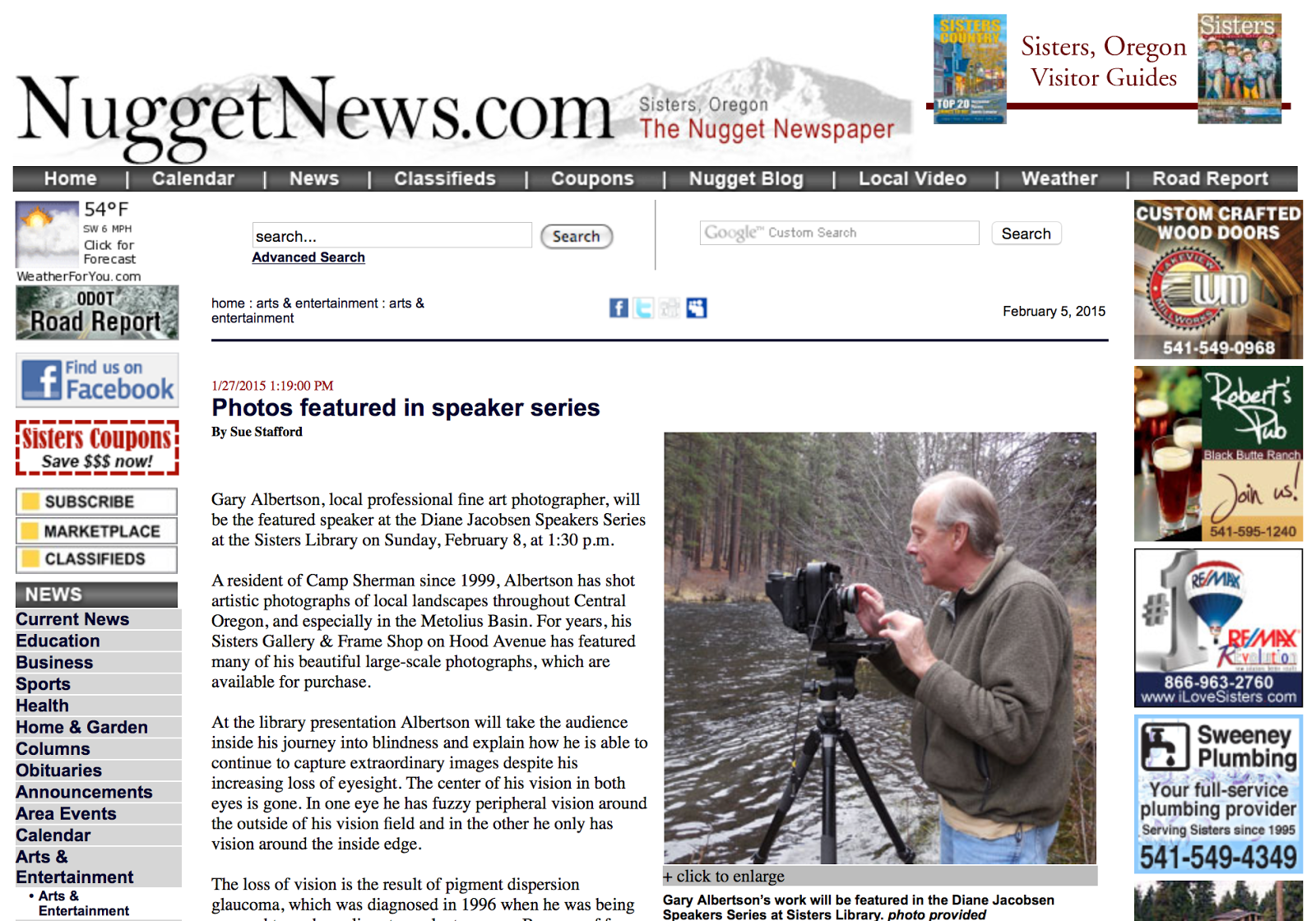 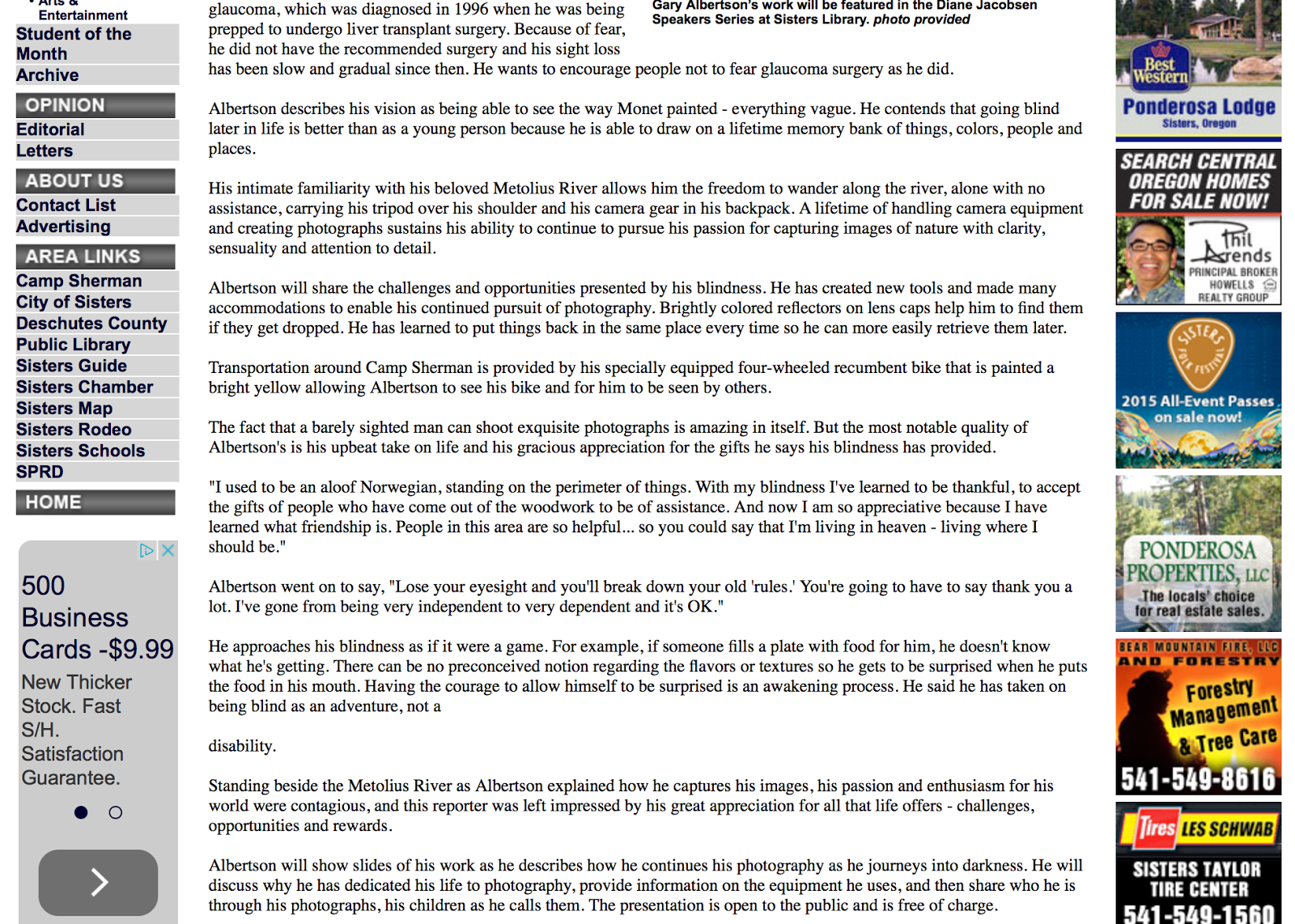 Posted by Unknown at 2:32 PM No comments:

As a photographer with deteriorating eyesight, Gary captures images on ﬁlm using his own special techniques developed to compensate for his fading vision. “The image captures me before I capture it,” is one of Gary’s favorite ways to describe how he decides what to photograph. He will share his passion for photography, including how he does it, as well as examples of his extraordinary work.
Posted by Unknown at 2:10 PM No comments: